Another in the CCC 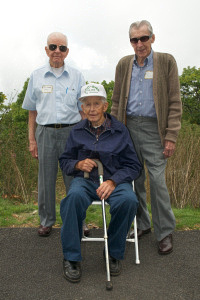 For the last couple of months I have been working with the Shenandoah National Park, in the archives, scanning old photos, listening to and recording oral histories, working with artifacts and preparing for a Civilian Conservation Corp reunion. The Civilian Conservation Corp was a New Deal project instituted in 1933 to jump start an economy and relieve those affected by the Great Depression. Over 3 million people participated in one of the largest relief efforts this country has seen. The “boys”, regardless of their background or skill level, were elected based on their current economic situation. At the time, a quarter of American workers could not find jobs. People were lining up on the street to get bread or soup. They had to be between the ages of 18-24 and unmarried. Some may have been living with their families, others may have been homeless, but all stood in line hoping to have the basic necessities provided for them while they used brain and brawn to create an national and state park system that we currently rely on today. There were approximately 10,000 men who left their homes from all over VA and the country and came for 6 months at a time, to live in army run camps, in sometimes harsh conditions to plant trees, build roadways, build a trail, a picnic shelter and drainage ditches, lodges and the like. They were housed in tarpaper barracks, clothed, ate simple home cooked food, but for some of them, it was the first time in years that they’d had three meals a day. In spite of doing hard manual labor, they gained weight and were healthy had happy. But it was not all hard work, they all had time after their work was done to get together, play cards, sports and go into local towns to socialize. Expert masons and carpenters taught them new skills. At night, educational leaders hired by the army would teach classes to the boys in everything from radio operating, carpentry, etc. Some of them learned to read and write and earn their GED’s. They were paid $30 a month of which $25 dollars went back home to their parents or families to help them survive as well. Some of the men cut hair, ironed shirts, or used their skills to create things for others for another 50 cents here one dollar there, anything to make some extra bucks. Some used the money for their weekend trips into towns to socialize, but most sent the extra back home since their needs were met.

The 78th annual CCC reunion was held on Saturday September 24th at the Big Meadows lodge in the Shenandoah Park. Over 50, wives, friends, rangers, family members and 3 original CCC “boys” showed for a day of memories, including presentations for the future for carrying on their legacy. We took the men and guests out to the old camp site at Big Meadows where they were shown displays. I could see one of the men recounting his days there, remembering where he used to play cards on a boulder with an old friend, the recreation hall where he used to play music and billiards and the mess hall where he had the best meals he could remember, after a long day working in the fields. As the day grew to a close, I sat down with two gentlemen who were both at the same camp and I showed them photographs as we talked about those days, the success of the program and the value of the work that exists to this day. Seeing those photographs, the men became 18 again and I saw a youthful vigor come over them. These men did what they had to do to survive. They joined so they could have food to eat and they enjoyed every minute of the grueling work. My understanding of these times and how they relate to today will be prolonged as I continue to interview these gentlemen and hear their stories and continue to teach the public about this invaluable service given to the rest of the country.